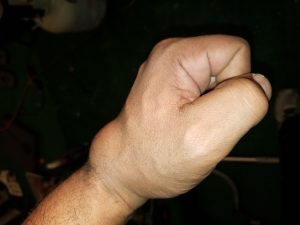 I don’t write these types of post often because IMHO, the people that understand this already understand it and the ones that refuse to listen will just ignore it (you know, like clients that hire you to create results for them but they don’t want to listen to your professional experience—because they know better—but still found the need to hire you for your expertise, right?).

Anyways, the timing was right so what the hell.

Long story short, I saw an article this week about an athlete that ended up in the hospital from overtraining with rhabdo, and from the hospital bed she warned other athletes that, “Overtraining is a real thing.”  My immediate thought was, “Why yes, yes it is real.  That’s why it’s documented in medical literature, and even has an official name, Rhabdomyolysis. Guess what…injuries are real too…that’s why we have to be smart about training and overtraining.”

Again, some people already understand this while others need to experience this type of medical emergency or injury first hand to learn from it (or will just make excuses to rationalize away these warnings).  But as the saying goes, a hard head creates a soft behind.  This doesn’t just pertain to CrossFit athletes, it crosscuts all competitive sports on REPETITIVE USE ACTIVITIES in general.  Especially those yahoo’s featured everyday on @gymfuckery! Bodybuilders aren’t immune from this either!  Take Ronnie Coleman for example, one of the greatest bodybuilders of all time, known for his InSaNe crazy heavy lifting routines…but as of today, doesn’t know if he’ll be able to walk again, or at least normally.  (UPDATE: Ironically enough, after writing my first draft I wanted to fact check myself and did a search on how Ronnie got injured and found he had said this on Instagram ”I hurt my back initially in high school.  The real damage was done in college playing football”.  I shIt you not. I found this AFTER I had finished this draft and if you decide to finish reading this post you’ll see why this statement is so relevant).

Think about it, how many articles have you read about retired NFL players or other professional athletes that are now having to live on painkillers the rest of their life in chronic pain, from injuries they sustained while doing what they love.  I say this because when you’re young, in your 20’s, and 30’s injuries doesn’t mean anything, because all they see is what’s in front of them.  The now!  Going for a personal record to post on Instagram, regardless of the long-term physical cost.  But I’m telling you, the injuries you rack up over the years will catch up to you—even AFTER the “youth” healing occurs.

Unfortunately, I was reminded of this last night after doing a very basic, and light workout—just a damn maintenance workout.  But, by the time I was done my wrist had swollen up (and continued to swell throughout the night) and I didn’t even injure it during the workout.  It was a damn basic workout.  Then I realized it’s the wrist I had broken in 3rd grade while running backward, the wrist I had broken in Jr. High after punching a wall heartbroken over a girl, the wrist injured while playing high school football and the wrist I had continually sprained over the years doing martial arts; not to mention dislocated thumbs, knees, shoulders head contusions, etc…you know the standard sports injury list.  Well, at 45, today was the day that all of those injuries caught up to me.  Seriously, it’s one thing to EARN an injury while training but getting an injury from doing “nothing” is really demoralizing (let alone getting injured in your sleep…I still don’t know how that happens).  Side note: Because of the wrist injuries sustained over the years (and learned from) I’m really conscious about training that involves the wrists.  Specifically, one of the WORST types of exercises you can do are those that require you to fall into the push-up position because it bends your wrist back into its weakest position (hence the injured wrist photo)…while your entire body weight + gravity + momentum is simultaneously being thrust upon it.  Those that have studied martial arts and boxing understand this and why we are taught to punch with a STRAIGHT WRIST so that the impact is absorbed through the much stronger bones of the forearm the ulna and radius.  But again, many athletes won’t hear this tip until they’ve broken their wrist or sustained a serious injury.  Worse yet, myself included at one time, they’ll go back to doing the same type of caustic training routine thinking that it has healed and all is good.  Well, I’m telling you…it catches up to you.  But if you don’t understand and respect CAUSALITY, you’ll end up saying exactly what Ronnie went on to say, “As long as you[r] doing what you love doing, fuck what anybody says negative about you.”  Bruh, let me tell you…just because you disagree with common sense science that may require you to stop doing or at least recommend corrective action, IS NOT NEGATIVE TALK!  It’s someone trying to help you avoid self-induced injuries that may leave you unable to do OTHER THINGS in your life that you may LOVE doing…like, uhm…say WALKING for example?

So while I truly understand the desire to be ones best, constantly challenging and pushing ones mental and physical limits—in addition to the endorphin high and adrenaline rush–it’s also important to remember that the extreme training we love is just a SHORT SEASON in what we hope will be a long life.  But when you’re young, constantly being sold on concepts like YOLO and everyone around you on social media is doing extreme training, it’s easy to forget that the injuries you inflict upon yourself today will likely come back and haunt you in the future.  Moreover, as I’m sitting here right now, working through the injury of course, for many people, injuries they sustain will also impact their ability to earn a living….support a family…mental state….and decrease their overall quality of life.  Was it really worth it?

Lord knows this isn’t meant to be an anti-training post but, as we say in the software industry, “Stand on the shoulders of giants,” so that you can learn from those that have already walked the path and avoid common pitfalls.  So this isn’t being written to be negative, it’s being said to help you live a better (healthier life) instead of having to repeat the same mistakes that have already been experienced and documented by those that have gone before you.

Now back to the grind.

Also a good article worth reading I came across: https://www.morganstanley.com/ideas/athletes-healthcare